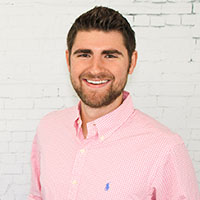 As a Business Economics & Public Policy as well as Finance major at Indiana University, Tom Marvel certainly never envisioned he’d be working in Indianapolis as an Engineering Manager 5 years down the line. Having grown up in Carmel, he was itching to explore outside of the Midwest. At the time, it didn’t seem like anything could keep him in Indianapolis.

That is, until he came across Orr Fellowship. Tom explains that, after an internship at a large corporation one summer, he realized that he wanted to be a part of a smaller company where he could have a larger impact. When he learned about Orr as a senior at IU in 2013, he was intrigued by the entrepreneurial opportunities and growth potential. On Finalist Day, he connected strongly with the company Octiv, a document-management cloud platform. He was offered a position on their team, and so began his Orr Fellowship journey.

Tom credits Orr with keeping him in Indianapolis – a place that had changed a lot from the Indy of his childhood. He returned from his four years at IU to a refreshed city with beautiful apartments, dynamic restaurants, and vibrant culture. “I really like the big city small town feel,” says Tom, “It’s big enough that you can get lost in it but small enough that you can know the local community.”

For Tom, Orr Fellowship was all about community and continued learning. The enriching experience he had with his peers led to strong bonds and friendships, and the learning opportunities offered through Orr’s Curriculum built for him a strong foundation of entrepreneurial knowledge. The seven-session Leadership Speaker Series hosted by board member Mark Hill stood out to him the most – the chance to hear from respected local business leaders taught him a lot about hard work, grit, and determination.

Tom is the classic example of a dedicated Fellow who took advantage of the opportunities Octiv presented to him. As a Fellow, he performed a variety of roles, from Implementation to Customer Success to Product Management. Being a Fellow gave him the opportunity to try a number of different things, get out of his comfort zone, and really spread his wings. The experience cemented his love for software and working with engineers. When an opportunity arose for an Engineering Manager position, Tom eagerly stepped up. “The best advice I can give to young professionals is to be your own advocate. Look for opportunities that you want and go get them – they’re not just going to fall into your lap,” he says.

Today, Tom manages Octiv’s engineering team. He’s continued on the learning track that began with Orr. Currently, he’s taking scrum master training courses and working to become a more agile-minded coach.“The experiences that I had in Orr are things that I look back to and have helped drive me forward,” he states. He certainly didn’t imagine this role for himself when he was in college but through the opportunities offered by Orr Fellowship, he was set on a path of continued development and abundant opportunities that led him to where he is today.