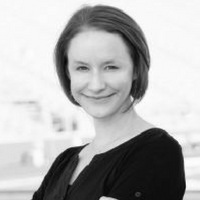 Nicole joined Orr Fellowship in 2005, only a few years after the organization’s formation. As a Marketing Major from Indiana University – Bloomington, Nicole watched many of her senior year classmates pursue traditional career paths with large companies like P&G and Deloitte. But, the thought of being “just a number” didn’t appeal to her. She wanted a career centered on relationships, constant learning, and the ability to wear a lot of hats. Enter the Orr Fellowship and host company ExactTarget.

What started as a two-year commitment to a fast-growing email marketing startup turned into a ten-year front-row seat to ExactTarget’s rise to global marketing leadership and eventual acquisition by Salesforce in 2013. Nicole quickly went from an entry-level marketing generalist to the company’s sole copywriter. Meanwhile, CEO Scott Dorsey and CFO Traci Dolan asked Nicole and three other current and past Orr Fellows (Darrell Grissen, R. J. Taylor, and Allison Clem) to develop a college recruiting strategy. The result was the Catapult New Grad Rotational Program and Slingshot Internship Program, which helped ExactTarget recruit 150+ of Indiana’s best and brightest students into “resume-worthy” roles across the company during her tenure.

College recruiting was Nicole’s first foray into “intrapreneurship,” but it wasn’t her last. In 2008 Nicole used that experience – and the business savvy learned through the Fellowship – to build an enterprise sales creative support team that influenced $20M+ in new business. She also managed the graphic design team and continued serving as main stage assistant producer during ExactTarget’s Connections user conference, an annual role which helped her learn how to keep her cool under pressure, work with executives, and hone her project management skills.

By the time Salesforce acquired ExactTarget, Nicole had developed a strong network, worn dozens of marketing hats, and been mentored by business leaders like Scott Dorsey and Todd Richardson and other Orr Fellows who had paved the way. She knew it was time to take all that she had learned and set out on her own.

“I love supporting the freelance revolution and people who want work/life balance,” says Nicole. “Within our first 15 months, we infused more than a half-million dollars back into the freelance economy.” And she did it without taking any outside funding. “Entrepreneurial success doesn’t have to be about raising millions from investors, buying expensive office space, hiring dozens or hundreds of employees, or getting big,” she says. “Entrepreneurship can also be about creating a lifestyle business that lets you follow your heart, achieve balance, and work with a small group of people you love. That’s the path I’ve chosen, and I’ve never been sorry for a second.”

Nicole has since relocated to Bozeman, Montana and runs her business virtually. “Most of my team and clients are still in Indianapolis, so that helps me stay connected,” she says. “Hopefully, more female Fellows will start businesses in Indy (or elsewhere) in the future!”