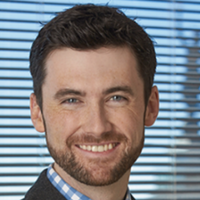 Mike Langellier – CEO at TechPoint – has walked alongside Orr Fellowship since his professional career began, believing that “career development is like a flight of stairs. Every next step you take is going to have a foundation of reliance on the step before, and you just have to trust it.”

Mike took his first step during college as an intern for Angie’s List where he worked under Scott Brenton – Orr Fellowship co-founder and President of the Board of Directors. “It was there that I found I enjoyed a fast-paced, growing environment to work in.” When Mike was offered an Orr Fellowship position upon graduating from DePauw University, he accepted saying, “I knew it was the thing I needed to do.”

Mike began Orr Fellowship in 2004 with Experian, a financial services company, where he learned how to manage the entire loan process. Outside of work, Mike met the love of his life, Carrie Strong, who also happened to be an Orr Fellow. “I was tasked with organizing the fall barbeque, and I needed to work with this other Orr Fellow named Carrie. She was one very impressive and attractive woman.” Mike followed his gut, and within the next year, they were happily married.

From his Orr Fellowship time spent at Experian, he was eager to try his hand at running his own company, so in 2010 he co-founded MyJibe, a personal financial management and advising platform. Within the next two years, Myjibe was acquired by MoneyDesktop. Mike stayed with his company for the next year as they continued to grow rapidly until he was approached by tech community leaders in Indianapolis. They asked if he would consider running TechPoint, a company promoting and accelerating the growth of Indiana’s tech community.

While contemplating TechPoint’s proposal, “I was having the same gut feeling that I had when I knew I needed to say yes to Orr Fellowship, propose to Carrie, and leave Experian to start MyJibe. I wanted to take what I had been learning and apply it towards making an impact.” Mike accepted TechPoint’s CEO position, and continues to push Indiana’s tech community forward through his job and being a member of Orr Fellowship’s Board of Directors.

“It was from people who had a grand strategy that changed this city forever. I want that opportunity. I want to be part of a platform to build success on.”