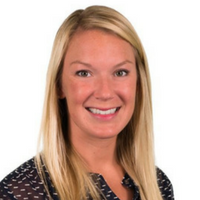 “Experimentation & Excellence” can be found in big, bright letters on the walls where Abbey Sullivan, Vice President of DyKnow, has worked for the last five years. These two words serve as a reminder for Abbey and her team that the only way to become greater is through continued growth.

Abbey was introduced to DyKnow through Orr Fellowship. She made her decision to become an Orr Fellow after graduating from DePauw because of the “genuine vibe [she] had during her experience with recruiters and other Fellows,” and her feelings have not changed. “The biggest thing for me was having a group of people to check-in with. I was constantly around people who had a similar drive as me, so I was able to hear stories that encouraged me to change.”

Throughout Abbey’s time at DyKnow, she has been responsible for nearly every job. Being responsible for different roles in multiple business departments continually challenged Abbey, but with the support from Orr Fellowship and an understanding that experimentation and failure eventually lead to excellence, she was able to persevere into a leadership position where she leads her employees in day-to-day activities.

Abbey still stays in touch with other Orr Fellow alumni. The relationships built during her time as an Orr Fellow continue to provide a valuable connection both professionally and personally.